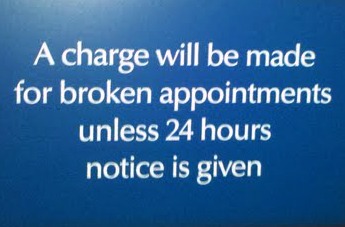 We’ve all seen the signs in the doctor’s office stating that there will be a late cancellation fee for appointments that are canceled with less than 24 hours notice.  I checked into the legality of this, and yes, the doctor’s office is allowed to charge for a late cancellation or a missed appointment.  How much they are allowed to charge is not standard, although it is usually either a set fee ($25, $50 and sometimes even higher) or what the person’s co-payment from their insurance would be.  One thing though, the patient must be made aware of the late cancellation fee in advance.

But what about when it’s the reverse?  What happens when you get a last minute call that your doctor’s appointment has to be cancelled or you are kept waiting an unreasonable amount of time to see the doctor?

Last week I was scheduled to get my eye exam at 10:30 a.m. on a work day.  The office didn’t have weekend or late night hours, but they took my insurance, so I made the appointment with them.  I am extremely busy at work, so to leave my job at 10 a.m. and not get back until sometime after 12 p.m. is a very big inconvenience and would mean that I would have to stay much later at work that evening to make up for the lost time.

But, my health is important, more so than my job, so I don’t skip getting the checkups that I need.

As I mentioned, I had left my job at 10 a.m. and hopped on a subway to get to the doctor.  I was approximately 2 blocks away when, at 10:26 a.m., my phone rang.  It was the receptionist at the doctor’s office telling me that the doctor was not going to be in for my appointment.  I was told that she had an emergency, and wasn’t coming into the office that day.  Really??  The doctor JUST told them, 4 minutes before she was supposed to see me, that she wouldn’t be in the office that day?  I don’t buy it.  Maybe I was the first appointment of the day, but why wouldn’t the doctor have been at the office already by that point?  Why was I just finding out when I was 2 blocks away?  Why was I finding out when I should have been seeing the doctor four minutes later?  I let the receptionist know that it was absolutely unacceptable, and that if it had been the other way around, she would have been telling me how I’d be getting a late fee charge.

So, I started researching online.  People actually DO send invoices to doctor’s offices for late cancellations, no shows of doctors, or excessive wait times.  Yes, our time is just as valuable!  So, I’ve decided that’s what I’m going to do.  And what I plan to do going forward when I am waiting more than I should have to wait to be seen.

But you cannot just send the bill for excessive wait times.  You need to inform the doctor’s office, just like they need to inform you.  Note the time that you enter the doctor’s office and have checked in with the receptionist. If you are kept waiting, after 20 minutes, calmly go up to the receptionist, and CALMLY (can’t stress this enough) inform them that you’ve been waiting for 20 minutes, and that at 30 minutes, you will begin charging at a rate of $x/hour.

Now, I mentioned the word “calmly” twice above.  That is because you don’t want to be hysterical, and you don’t want to turn this into a debate.  It’s not up for debate or discussion.  Excuses are not relevant.  I don’t care that there was an “earlier emergency”. That just doctor’s office-speak for … we overbook, and this happens all the time, so we just say that there was an unforeseen emergency.

If they try to make your STATEMENT into a discussion/debate, simply, and CALMLY, say that you were just informing them that you will be invoicing for your lost time, and that is all.  Then turn and walk to your waiting seat.

And then, follow up by sending the invoice!  Don’t back down from what you said you would do.  It will cost the price of a stamp.  And perhaps you’ll be surprised, you actually might get paid.

If waiting excessively to be seen is a usual occurrence at your doctor’s office, though, you may want to find a new doctor.

This site uses Akismet to reduce spam. Learn how your comment data is processed.